The cooperation of Emperor Akbar

Indian Paintings of the Mughal Period.

Abul Fazal started writing the Legendary book Ain-e-Akbari[1]at the time when Mir Syed Ali completed his paintings of the album Dastan-e-ameer-hamza for a while ago. Our previous discussion asserted that the impact of the Indian traditional art recognized in those paintings of the album. Such influence was the core point of the Mughal style. The detailing of those Iranian paintings assists us in recalling the paintings of Durer. Based on the Indian tradition, those paintings were full of vibrant colors that make us charmed.

After the Iranian Kalam; Indian traditional art flowed to the Mughal paintings respectively which gained more liberties, and self-confidence. The interfusion among the native Rajput style and persian style got a new form that scholars recognized as Mughal Miniature. It had absolutely a separate character which later recognized as Indian 'Gharana'.

Here, I arranged a few of those masterpiece paintings from that legendary album to show you how marvelous those were! Just click on each painting to enlarge and enjoy the closer view with details. 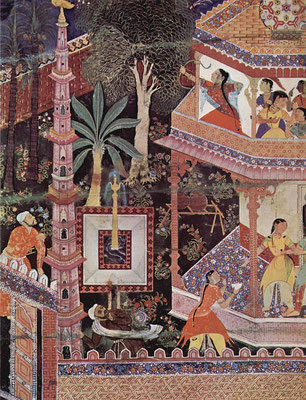 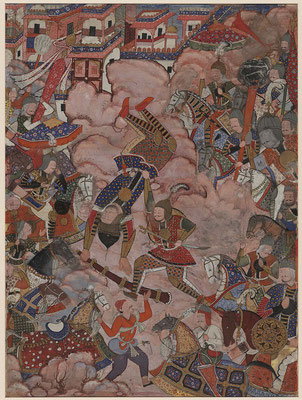 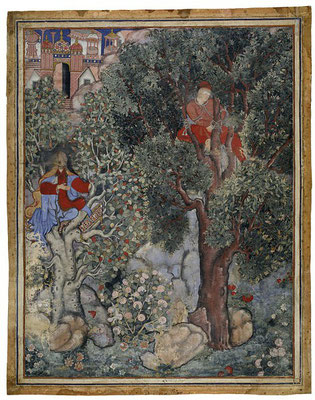 Paintings from the album, - Hamzanama

Now, it is question, how did it possible? How did an exotic method adopt quickly the Indian style which is apparently quite difficult for any community?  It was only possible for the emperor Akbar and his son named Jahangir. They introduced their artists to the Indian contemporary artists and moreover, they generously requested both artists to work with the same paintings. Both of the artists took place in the king's court in the same means considered as the royal artist. Therefore, we observe the great Indian artists of that era like Keshu Das, Dyshant, Vasawon had been working with exotic artists such as Mir Syed Ali, Abdus Samad, etc.

It is known to all that Akbar was mostly illiterate and had no ability to read or write anything, but he was impulsive and had a huge curiosity from the creepers, flowers, insects to history, philosophy, thoughts and eminence of human being. He additionally had the delicacy and reverence for all the things that he could be adopted with his merit and strong memory. Hunting in the deep forest was his another passion. To get introduced with all the knowledge regarding the concernment of human being, he started some new ways. In each time, when he got a new book, he ordered his royal artists to illustrate the book that he could get to know what is about this book. Suchwise, he also loved to arrange a debate in his royal court by inviting the wise persons of several communities. The topic went on several aspects such as philosophy, religion, literature, music, painting and more. He got to concentrate on all the debates and gained the extract of the discussion. It was his best way to penetrate the philosophical sense of several religions to illustrate the stories and folktales stated in those spiritual scriptures. All those above-stated information we could observe in the treatise of Ain-e-Akbari composed by Abul Fazal.

It's notable that Babur and Humayun were exotic and had no relation to Indian art and culture. However; they had a passion for art which motivated them to proceed with Indian art, besides the Persian style. Akbar was in-born Indian and from childhood; he experienced the versatile Indian culture which influenced him to get closer to the Indian civilization.

After getting back the throne of Emperor, Akbar did not forget about the incomplete work of Dastan-e-ameer-hamza and ordered those Iranian artists, involved to illustrate that album. He additionally found some talented Indian artists and recruited them to complete the album with Iranian artists. Akbar rename that album as - 'Hamzanama'. The first painting of that album is composed in 1562. The album was completed in 1577. It is a great document of the Indian history of art conveying the process of development step by step in several times. In that twelve parts contained 1400 standard size paintings of several times indicates how Persian style had been modified with Indian style and got a new form we recognized as Mughal Miniature that is full of versatility, emotion, and sensation of colors. It is one of the notable works of the Emperor Akbar. In the persian language, it called "Murakka" that is same as the word, -  Album.

Now tell me, how did you enjoy the paintings of Hamzanama? Have you ever noticed some odd-looking perspective sense that ignore the common western concept of the factor of distance? If you are curious on such a sense of Indian perspective, just start a discussion below, I'll help you to understand. You can post your comment as a guest without login via social profiles. You can even create a profile in Disqus to start. It just a matter of a second. Thank you for your interest.

Will continue in next episode

[The article is subject to copyright act. If you want to use any part of this article, please contact the author for permission]

The Ain-i-Akbari (Persian: آئینِ اکبری‎) or the "Administration of Akbar", is a 16th-century detailed document recording the administration of the Mughal Empire under Emperor Akbar, written by his court historian, Abu'l Fazl in the Persian language. It forms Volume III and the final part of the much larger document, the Akbarnama (Account of Akbar), also by Abu'l-Fazl, and is itself in three volumes.

It is now in the Hazarduari Palace, India. The Ain-i-Akbari containing information on Akbar's reign in the form of administrative reports, similar to a gazetteer. In Blochmann's explanation, "it contains the 'āīn' (i.e. mode of governing) of Emperor Akbar, and is in fact the administrative report and statistical return of his government as it was about 1590."

The Ain-i-Akbari is divided into five books. The first book called manzil-abadi deals with the imperial household and it's maintenance, and the second called sipah-abadi, with the servants of the emperor, military and civil services. The third deals with imperial administration, containing regulations for the judiciary and the executive. The fourth contains information on Hindu philosophy, science, social customs and literature. The fifth contains sayings of Akbar, along with an account of the ancestry and biography of the author.

All the contains of this website are subject to the intellectual property copyright act. If you want to reuse any contain such as article or image, please contact the artist for permission.