The metaphorical concepts and rules of Indian sculpture. Part - 3

Knee – The idea of knee came from the carapace or shell of the hermit.

Calf - The author suggested the metaphor of calf by observing the similarity to fish, however, he specified that it may not be similar to any fish; rather it must have to be a pregnant fish which looks very near to a calf. What a wonderful observation!

Hand and toe – The concept of toe and hand came from the leaf of the tree. Author precepted that it must have to be thin because the thicker hand represented the unhappiness, sorrowfulness, moreover, the person who bears such hand considered harmful! In another book, there was a metaphorical description came from the petal of lotus. In many Sanskrit poems or pieces of literature, I found the metaphor of the petal of lotus for the hand or toe described as – “karakamal” and “charan kamal”. “Kara” means hand, “Charna” means toe, and the Kamal mean lotus. In most of the Indian mythological or spiritual sculptures, artists followed the suggestion of the petal of lotus since the very front side of the petal is slightly curved which looks very near to a toe or hand.

There were a lot of ancient books of sculpture wrote in the Sanskrit language presently our of the world, only remains few reference books came from those ancient scriptures. The most popular books were, - “Breehatsanhita” (probably available in Hindi) and “Suprovedagam”(not available in any language, only remains few referential books). In those books, the guidelines or descriptions in regards to the techniques of sculpture were not confine with such rules that are only applicable for the religious sculpture, rather it allowed all sort of sculpture; religious or non-religious. Therefore, those rules were most popular in sculptors. The author of those scriptures probably was very generous; however, he suggested some standard rules. The model of any god or goddess that is making for Hindu worship purpose must have to be made by soil, metal, or stone, but there was no limit of materials to make a model or sculpture. Probably he realized the possibilities of several mediums and so, he has given the widest liberty to artists to work with any medium. Still, in Hinduism, it is strictly maintaining a standard rule, accordingly, in many places of India we can see some wonderful works with several mediums that have reached the highest label of artistry. At the time of “Puja” festival in Calcutta, just take a short tour and you will be amazed to discover the possibilities of model making in several mediums that are just unbelievable! Here is an example, - 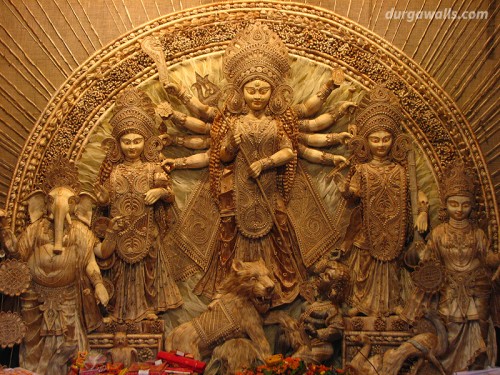 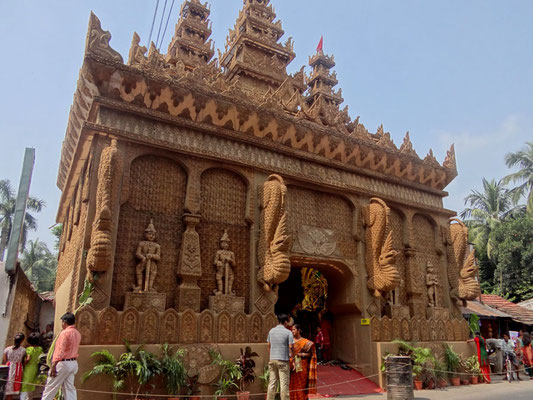 The model of Goddess Durga and an artificial temple, both made by the jute

Secondly, it is precepted that the figure must need to cover by clothes from waist to leg and the rest portion of the body will be covered by the various ornaments depends on the character, male and female.

The face of each model should be young. The author strictly advised to avoid the old aged face in common concept, however, such face only applicable in the model in meditative mood or a specific person who is in meditation.

It was not allowed to make a sculpture fatty or weak. The author considered such models as a symbol of sickness and dearth.

I stated that in India, the reason of making sculpture was to make a spiritual impact and establish the religious movement in human civilization. Therefore, most of the oldest Indian sculpture made by following the stories of religious scriptures such as Gita, Ramayana, Mahabharata, Purana and so on. In those stories, we have found some supernatural characters bearing an insubstantial figure. An example from the world’s largest epic Ramayana. In that epic, a character named Ravana. who was the king of Lanka (presently SriLanka) bearing the ten heads at the time of the battle.

According to the Hindu mythology, Brahma, who is the main father of human and the creator of this universe as well, bearing the four heads. To arrange orderly more than one head in sculptures, the author suggested some guidelines for sculptors.

To arrange four heads consequently, author settled a rule. The other three heads will be taking place side by side around the main head by following the four corners of the world such as east, west, north, and south, moreover, all four heads will take the place on a single neck and throat.

Lord Shiva imagined with five heads. His other name is “Panchanan” indicating his five headed figure. To arrange the five heads, the author suggested holding the place of the fifth head on the upper portion of the four heads. Normally the mouth will either be in front view or up.

In the consequence of placing the ten heads, it is precepted that by maintaining the said composition of four heads, three heads will be taking place on the four head conjointly and two heads will be on the three head inversely. The rest one head will be on the most upside of all heads. It is fact that I have not found such composition of heads in any ancient sculpture of ten-headed Ravana. In most of the sculptures, the ten heads composed equally both sides of the main head. Probably the look of such composition is furious and therefore, it is more popular.

Here, I would like to share a name of an ancient sage who had the widest contribution to preserving the ancient scriptures of Indian art, sculpture, and gothic art. He was famous by the name- “Aggyasta”. For his greatest contribution, he revered as God. He recovered some oldest scriptures of gothic art bearing the name, Mansar, Shilparatna, and Mayamata. In the scripture of art and painting, he recovered some books named, Chettrarnaba, Vishnudharmattor, wrote by the sage named “Authri”.

In the historical period, India faced outrage of foreign enemies in several times that damaged most of the sculptures and gothic art of northern and north-eastern parts of India, however, some of the most important sculptures still remaining in south India, bearing the documents of the highest label of the prosperity of sculpture art. I personally love the wonderful sculptures of Chidambaram temple that performed the each gesture of Indian classical dance named Varatnattyam”. It’s a must-see temple of south India to understand the Indian classical dance and the significance of Indian sculpture as well. You will discover one of the most significant and worldwide popular Indian sculptures Named “Natraj” (Lord Shiva in the furious mood) in the temple making the revered and worship from devotees.

All the contains of this website are subject to the intellectual property copyright act. If you want to reuse any contain such as article or image, please contact the artist for permission.